Forward 2045 is the latest update to the Santee-Lynches Regional Long-Range Transportation Plan (LRTP). Updated every five years, the LRTP covers the non-urbanized region of Clarendon, Kershaw, Lee, and Sumter Counties and identifies a long-term transportation vision for the region along with policies and proposed infrastructure investments that will enhance the transportation system to align with the community's vision.

Forward 2045 was adopted by the Santee-Lynches Regional Council of Governments Board of Directors on June 3, 2019, and is available for download using the button below:

The Plan’s Appendices, including full project listings, are available for download using the button below:

Transportation and the Santee-Lynches Region

The Santee-Lynches transportation planning region encompasses all of Clarendon and Lee Counties and the non-urbanized portions of Kershaw and Sumter Counties. This planning area contains 10 municipalities and is home to over 223,000 people.

The Santee-Lynches region grew by approximately 13,000 people between 2000 and 2017, with the majority of the growth occurring before 2010. That growth as been uneven throughout the region. Kershaw County has experienced dramatic growth, adding over 12,000 people to the population mostly in western Kershaw. Sumter and Clarendon Counties experienced steady population growth between 2000 and 2010, yet growth has stagnated since 2010. Meanwhile, Lee County saw significant population decline losing 3,000 people, almost 14% of its 2000 population. 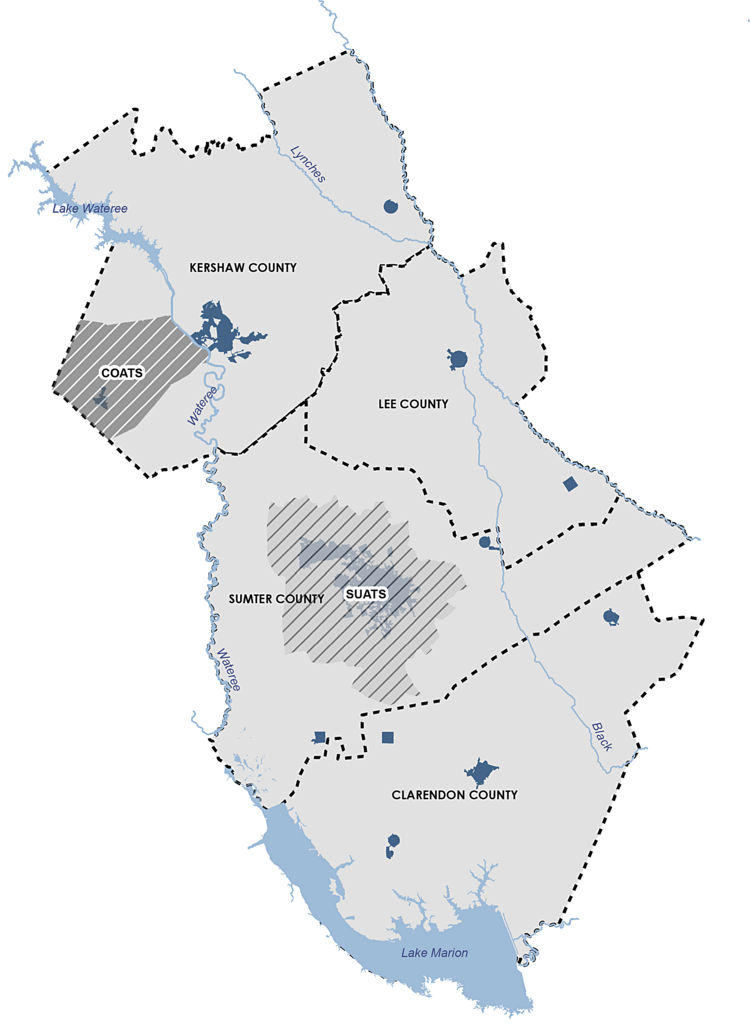 The population in the Santee-Lynches region is aging. The median age of residents in all of the counties has increased by between 4 to 6 years with the exception of Sumter County. The percent of the population over age 65 has also increased during the same period by over 4.0% in all the counties. This aging population will present some transportation challenges in the future as older individuals are often less mobile and face unique safety challenges as drivers.

The Santee-Lynches region has long been an agricultural hub. While agriculture remains an important segment of the economy, manufacturing and retail have become dominant employment sectors, and much of the anticipated growth in the four counties is tied to the establishment of major manufacturing operations and the growth of the of the Columbia metro area to the west. Currently, the City of Sumter, the largest city, serves as a focal point for economic and social activities. Camden serves as a secondary regional center, while Bishopville and Manning serve as trade centers within their respective counties. These are the areas with the greatest concentration of jobs.

The region also has many strategic transportation linkages within the state and beyond. Close proximity to Columbia affords easy access to both road and air transportation hubs, including the Columbia Metropolitan Airport (CAE). A short distance to the south, the Port of Charleston is one of the East Coast’s major seaports. Access to I-20 and I-95, provides easy ground transportation for both North-South and East-West travel. Both highways are key freight corridors. 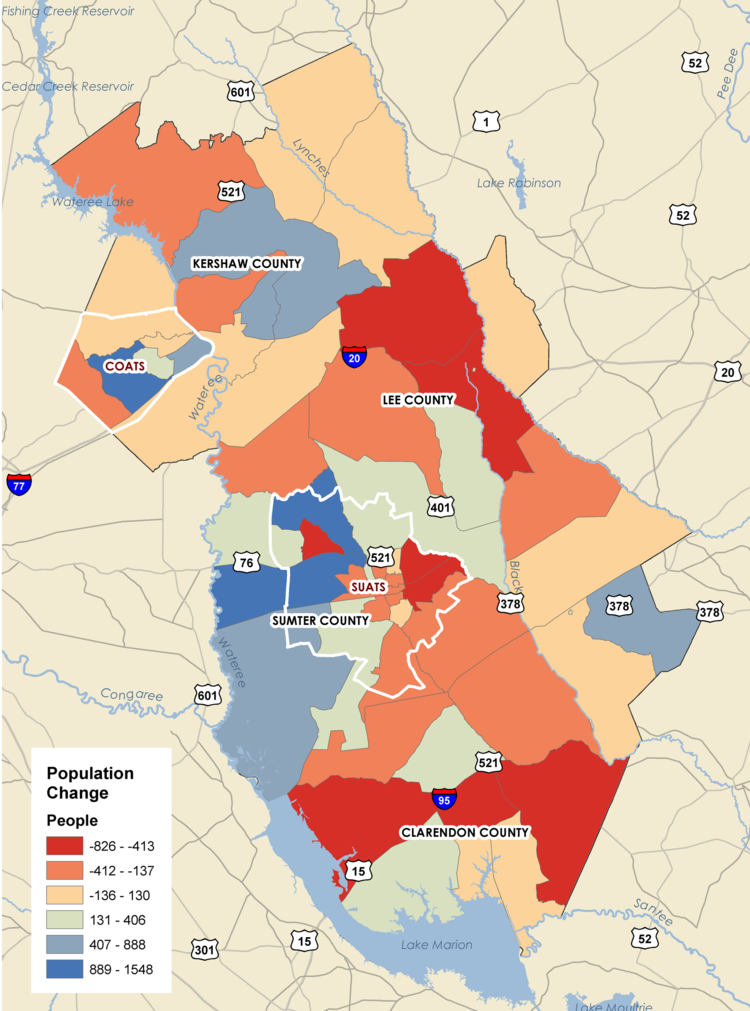 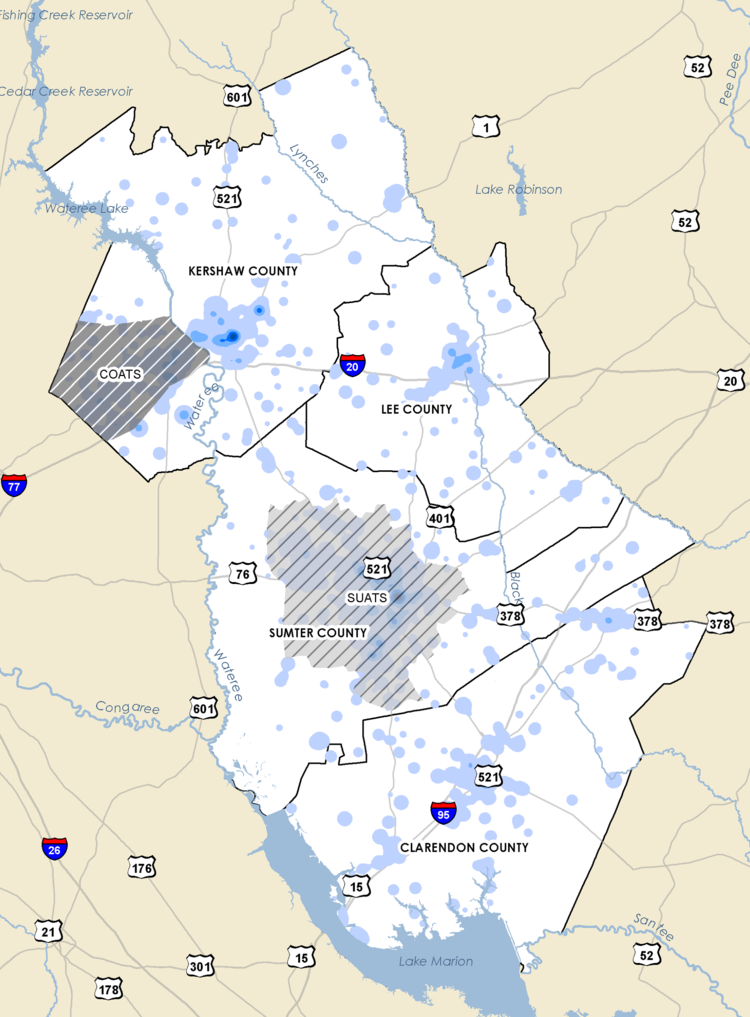 Defined by the Federal Highway Administration (FHA), a roadway's functional classification designates the purpose of a roadway and the service it provides as part of the road network. There are four major functional classes of roads in the region.

Arterials - roads that supplement interstates, connecting cities and town inside and outside the region. Arterials provide high mobility at moderate to fast speeds and provide some access to local properties.

Locals - roads that provide limited mobility and are the primary access to residential areas, businesses, and other local areas. They have the lowest speeds and make up the majority of roads. 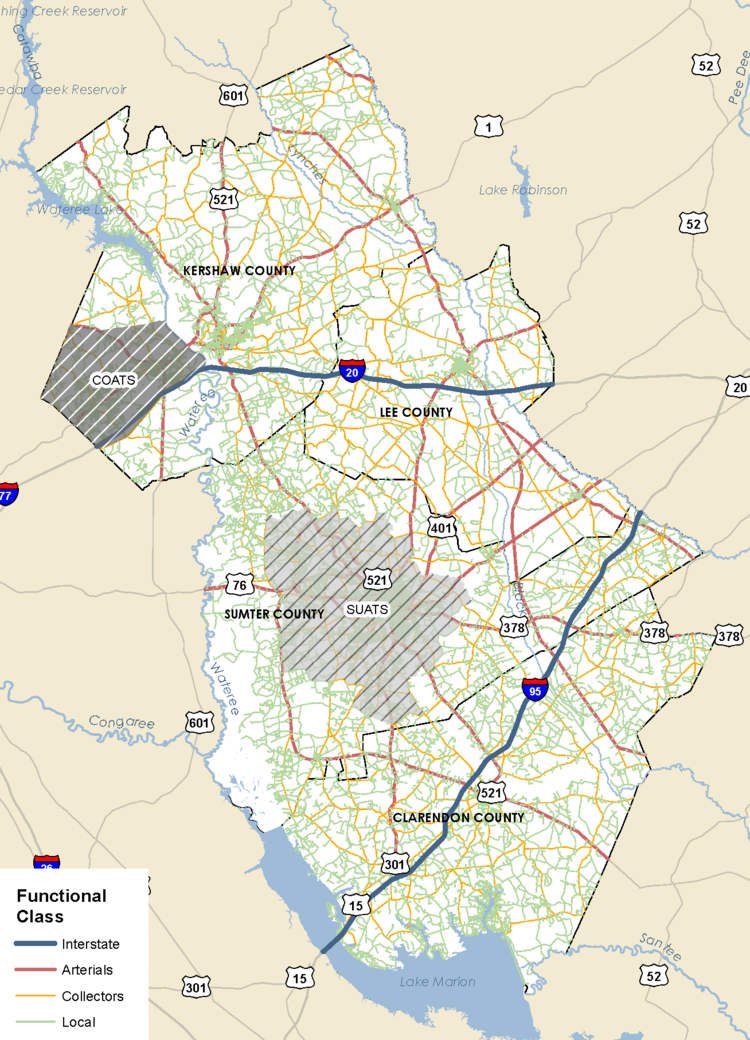 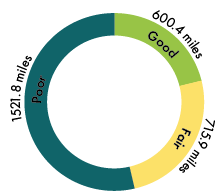 Annual Average Daily Traffic (AADT) indicates the traffic volumes for each roadway in 2016 as collected by the South Carolina Department of Transportation (SCDOT).

Other roads with high traffic volumes in the planning region include: 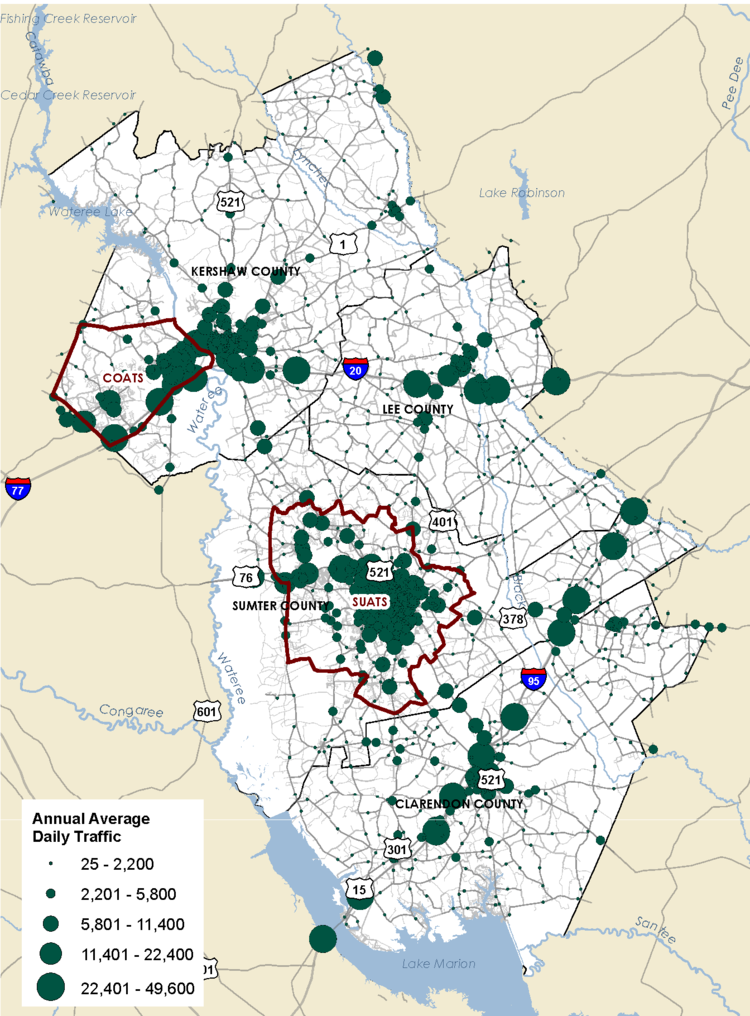 Between 2011 and 2016, there were 11,989 total crashes recorded in the Santee-Lynches planning jurisdiction. Of those crashes, 4% were serious or fatal crashes. The majority of these serious and fatal crashes occurred around Camden and to a lesser extent along I-95, near Manning. This map does not show crashes in the SUATS or COATS planning areas.

The following is a breakdown of the crashes by severity in the planning region over a five year period. 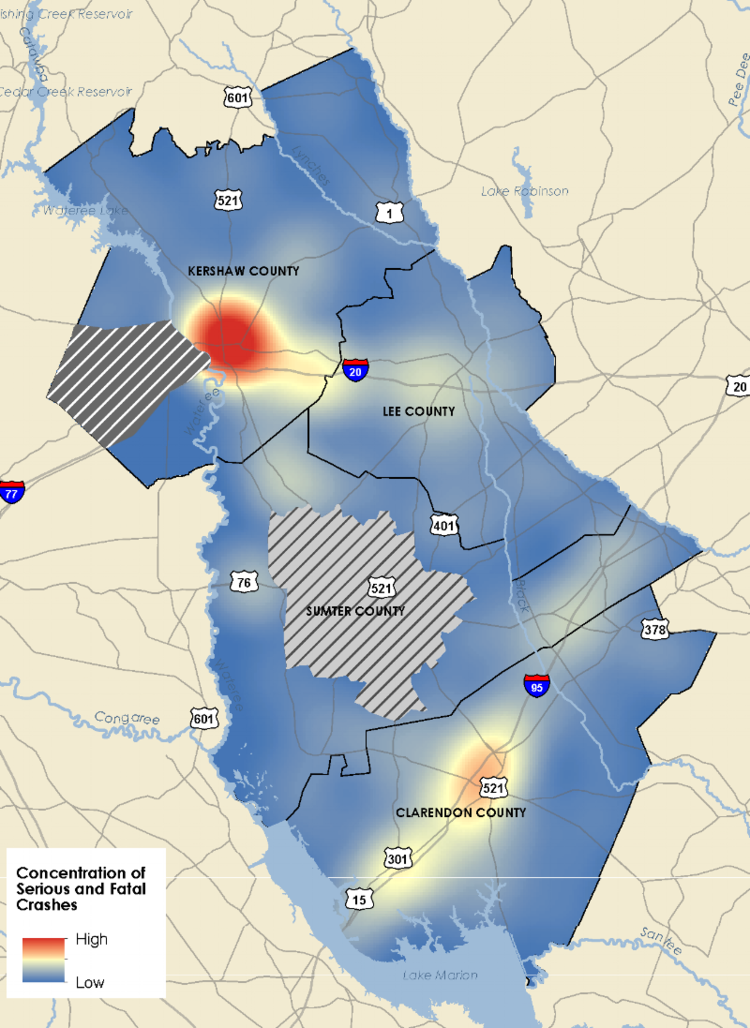 Santee-Wateree Regional Transportation Authority (SWRTA) operates several fixed-route bus routes in the Sumter metro area and in Lee County, as well as commuter routes to Camden and Columbia. SWRTA also offers paratransit services in throughout the counties, often in conjunction with other local agencies.

In addition to the local services, there are several long distance services that operate in the region including Greyhound with stops in Sumter and Camden, and Southeastern Stages, with a stop in Sumter. This map shows the location of local routes in the region.

Each of the municipalities in the planning region has some sidewalk network, with some localities having more limited networks than others. In addition to the municipal sidewalk networks, there are a few rural crossroads in the region that also have some sidewalks: St. Charles in Lee County and Alcolu and New Zion in Clarendon County. Sidewalks that are on both sides of the road are highlighted in blue while sidewalks that are only on one side of the road are highlighted in orange in the maps below. 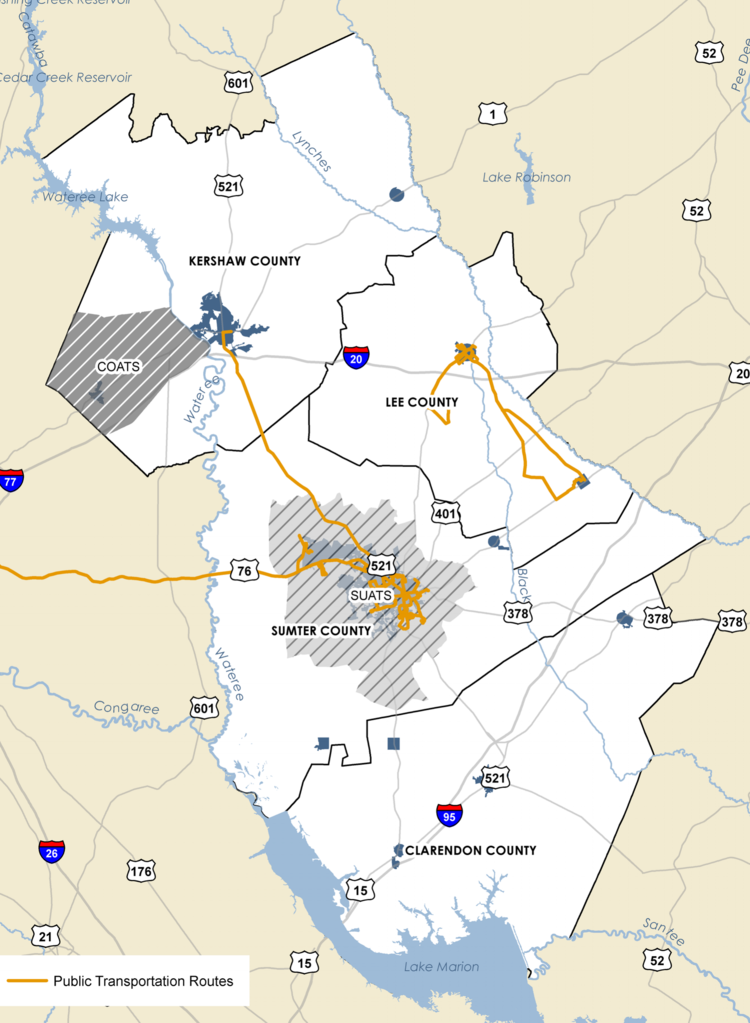