Janae Stowe is the Chief of Health and Human Services (HHS) and the Area Agency on Aging (AAA) Director for Santee-Lynches Regional Council of Governments (COG).

As the leader of the Health and Human Services department, Stowe is responsible for a $2.09 million budget and planning, developing and implementing a regional service delivery programs which address the needs of the older population. She ensures these programs are implemented in accordance with the guidelines of the South Carolina Department on Aging, Long Term Care, the Older Americans Act and various legislation as brought forward from Congress and the State Legislature. In order to develop a cohesive plan, she interacts with local agencies and stakeholders to establish partnerships and other solutions to meet the needs of our older population and maximize the grant funding. Stowe is also responsible for the direct administration and programmatic supervision of nine department staff, in addition to the direct supervision of all student interns several colleges and universities. Additionally, she is responsible for recruiting and procuring services necessary to implement plans consistent with state and local guidelines, drafting necessary services agreements, requests for proposals and other similar documents. Further, Stowe is responsible for the oversight of contract agreements with the various agencies in which the COG contracts to provide services in the region. Stowe also oversees the Regional Aging and Disability Advisory Committee, as well as works directly with the Health and Human Services Committee to the Santee-Lynches COG Board.

Stowe began her journey at the Santee-Lynches COG as an intern and transition to a volunteer. She entered employment with Santee-Lynches COG 2012. She went on to serve in coordinator positions for multiple programs within the Health and Humans Services Department to include the Information Referral and Assistance Coordinator. She completed her initial State Health Insurance Program (SHIP) certification in 2012 and received her Information Referral Specialist for Aging Certification in 2014. She was recertified as an Information Referral Specialist for Aging/Disability in 2016.

Additionally, Stowe serves on the Human Service Advisory Committee for Central Carolina Technical College and is a member of the South Carolina Local Government Leadership Institute. She earned her Bachelor’s Degree in Healthcare Administration.

Stowe grew up in Boise, ID and moved to Sumter in 2009. She is married to Michael and they have a beautiful blended family of three: Dru, Nicholas, and Logan. Stowe loves spending time with her family, especially for camping trips and sporting events. 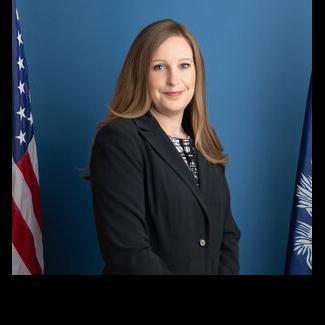